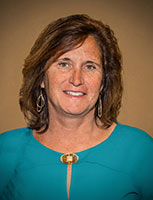 TRENTON – February 3, 2020 – Linda Doherty, a long-time member of the Board of Trustees of the New Jersey Clean Communities Council (NJCCC), has been elected to serve as the board’s president.

Doherty, who had served in recent years as the vice president, is taking over the top spot from Patrick Ryan, who served as president of NJCCC since 2001. Ryan decided to step down last year from the volunteer position, and will remain on the board for 2020 to help guide anti-litter initiatives involving cleanup, enforcement and education.

“I am tremendously thankful to the Board for this vote of confidence and look forward to directing efforts that educate many more New Jerseyans about ways in which to reduce litter,” said Doherty, who is also the president & CEO of the New Jersey Food Council (NJFC). “There are many ways in which the NJCCC provides education and financial support across the state. My job is to ensure partnerships between local and state government, business, our schools, and the community amplify our anti-littering message.”

The NJCCC, a comprehensive, litter-abatement program funded through a litter tax paid by the business community that does produce litter-generating products, reaches every municipality in New Jersey, providing grants to combat litter on the local level. The non-profit organization also coordinates statewide education events, focusing many of its initiatives on children. For example, the NJCCC holds an annual Environmental Exchange each March that brings together students from across the state, as well as a statewide conference in May that has a significant educational component.

The NJCCC oversees the implementation of litter abatement programs in 558 municipalities and 21 counties, collects statistical reports, maintains a database of information that tracks local programs, and implements a statewide program of public information and education that targets Clean Communities coordinators, schools, and the general public.

The NJCCC also coordinates such well-known statewide programs as “Adopt a Beach” and “Adopt a Highway,” as well its current campaign known as “Choose to Reuse New Jersey.” That is another statewide program designed to encourage people to bring their own shopping bags to the store in an effort to greatly reduce single-use plastic and paper bags.

“We believe Linda is the absolute best individual to take the reins of the NJCCC based on her vast experience of our anti-littering campaigns and her focus on education and inclusion,” said Ryan, noting that Doherty was the architect behind the ongoing Choose to Reuse New Jersey campaign launched recently. “She has vast contacts in Trenton among decisions-makers and a pristine reputation throughout professional circles. Linda is the ideal representative for the NJCCC.”

Doherty is the longest-serving president in the history of the NJFC, now in her 16th year. Her roots in the organization span 27 years. Doherty served as Executive Vice President and Vice President and also held the position of Director of Communications and Public Affairs for the association.

Under her guidance, the NJFC has grown into one of the strongest business trade associations in the region, representing more than 1,500 members in the food retail, wholesale, and manufacturing segments of the $136 billion New Jersey food distribution industry, including some of the largest employers in a state with almost nine million residents to feed every day.

Doherty is active across New Jersey. She is chair of the WIC Advisory Committee, serves on the State Task Force on Wages and State Benefits, is a member of the New Jersey Child Labor Law Enforcement Advisory Board in the state Department of Labor, is a Senior Executive Council Member of the Trenton Rescue Mission and serves as an External Advisory Board member for the New Jersey Institute for Food, Nutrition & Health at Rutgers University.

Doherty is also a sector representative on the Infrastructure Advisory Committee, a part of the Governor’s Domestic Security Preparedness Task Force. Under her leadership, Doherty has been instrumental in creating and developing Emergency Management, and Food Safety & Defense programs for NJFC members in conjunction with government partners.

In 2019, Doherty was ranked tenth on the NJ Food & Beverage 100 Power List and named to NJ Influencers Power List. In 2018 and 2017, she was named a Top 100 Policymaker by InsiderNJ and was recognized by NJBIZ as one of the Best 50 Women in Business in NJ. In 2018, she was named a Top 25 Leading Women Brand Builder.

Doherty received a communications degree from Rutgers University in New Brunswick. She is married to former Mayor William Tilton, Jr. of North Hanover and has three children.